The telescopic handlers of the Roto range allow 360 degree operation thanks to being equipped with turrets capable of rotating up to 600°, which offers a greater range of action compared to a fixed telescopic handler.
The new Roto family marks a new era by introducing new standards in the field of telescopic handlers for the construction sector and expanding the product range with new contents, adapting more and more to the needs of different users.

The ROTO50.26 S-classic allows a continuous 360° rotation, equipped with intelligent Hydropneumatic Suspensions on axles as standard, giving the possibility to the machine when is on wheels of varying the height according to the soil.

The S Version with 170 HP engine, are combined with the Eco Power Drive (EPD) electronic management that automatically controls and adjusts the engine revolutions based on operating conditions. This technology achieves a reduction in fuel consumption of up to 18%. The system allows you to collect different parameters submitted by the machine, analyse them in real time and create a load diagram that allows the operator, through the new LCD display, to understand the perimeter within he/she can operate in maximum safety. 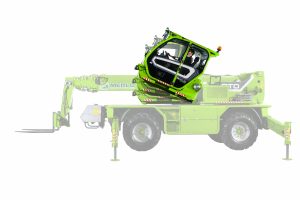 Integrated into the chassis, is available as standard on this model: it allows the operator to offset the ground slopes to work in total safety. On sloping terrain the operator can correct the lateral inclination by 12% and frontal inclination by 4%.
ROTO machines are equipped as standard with Self-stabilisation and Self-levelling on stabilisers: this allows greater ease of use, less wasted time for the stabilisation phases and the possibility of correcting transversal and longitudinal slopes.